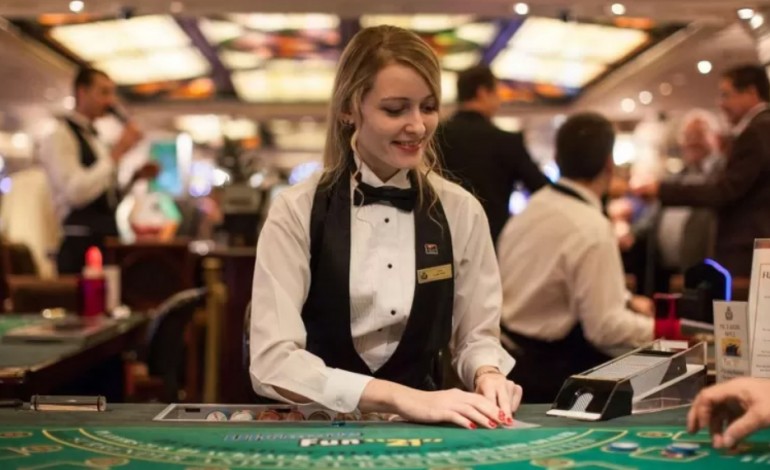 As you enter the casino resort, you are immediately met with the exciting hum of games and guests, huddled around tables and machines with their eyes glued on their game or entertainment of choice. A server passes by you and nods with a polite, practiced smile as you make your way through the sprawling lobby towards the front desk. Images of the neon-soaked street outside, seemingly overflowing with attractions and people play in your mind as you settle in for the next few days. Some even encompassing entire city blocks with restaurants, bars, theaters, nightclubs, and even the occasional theme park. This is, if anything, the epitome of a casino resort: lights, excitement, sprawling floors, upscale accents, and attentive staff. When it comes to hospitality, casinos simply offer something special — a carefree environment where guests forget their troubles, spend money, and create the kind of memories that keep them coming back.

Within that same picture, however, exists a widespread and growing concern. Although news headlines focus on guest safety and data security, you can’t overlook the safety and security of your employees, for their health and productivity, both of which affect your bottom line. Hospitality staff frequently find themselves subject to vulnerable circumstances due to the nature of their role — ranging from physical strain associated with labor and heightened risk of assault or harassment. While this risk was often publicly minimized in the past, it seems that we are finally rounding the corner to a hospitality landscape in which properties actively prioritize and protect staff safety and well-being. While much of this discussion — and corresponding legislation — has been directed towards hotels, we can’t neglect to include casino resorts and consider the unique risks their employees often face.

In fact, the harassment that many hospitality workers have faced for years is finally becoming something of a national conversation. In a 2017 Huffington Post Business op-ed, Maria Elena Durazo, a labor leader with the hospitality union Unite Here explained, “Frankly, I don’t think much of the public understands what housekeepers go through just to clean these rooms and carry out the work”. For several years Durazo’s union has advocated for housekeepers to be given handheld, wireless panic buttons that can alert hotel security when a worker feels threatened. Within that article, a Chicago housekeeper alluded to the countless times she had felt threatened or violated while doing her job. A male guest once answered her knock by opening the door naked. Just a month and a half prior, a younger colleague confided to her that a male guest had tried to embrace her while she was in his room. According to a survey of 500 Chicago residents who work in hotels and casinos as housekeepers and servers 58% of hotel workers and 77% of casino workers said they had been sexually harassed by a guest. Further, 56% of hotel workers who’d reported harassment said they didn’t feel safe on the job afterward.

It’s precisely these reports that have made way for new legislation and regulation(s) geared towards enhancing the safety and protection of casino staff.

In fact, the Illinois statewide SB75 anti-harassment legislation is currently awaiting approval which closely mirrors the Chicago ordinance enacted in 2017. The Act will require downstate hotel and casinos to provide employees working alone anywhere on property with portable notification/safety devices (“panic buttons”) that summon help to the employee’s location when the employee believes that an ongoing crime, sexual harassment, sexual assault, or other emergency is occurring in their presence. These devices must be provided at no cost. Many other states have enacted or are in the process of enacting similar legislation.

When asked about the new New Jersey legislation, a housekeeper in Atlantic City said she’s relieved she will be able to summon help at the touch of a button. “Today the lawmakers in New Jersey stood up with my co-workers and I to say no more to guests exposing themselves to us, soliciting us for sex, and allowing us to be unsafe as we open the door to a guest room, with no idea what is waiting for us behind it,” she said. “It’s great knowing I’ll be able to come home safe at the end of my shift. I can do my job without being worried.” Thomas Mueller, VP of Hotel Operations at Pechanga Resorts — the largest casino in California — furthers this sentiment from the perspective of a hotelier, “We consistently strive to stay ahead of safety issues and threats. The one-touch React Mobile button gives us and our team members that extra layer of security and peace of mind.”

With the implementation of hotel safety panic buttons, hospitality safety platforms, and employee safety devices (ESDs) casino staff can rest assured that help is always accessible. The devices utilize Bluetooth beacon technology to pinpoint the exact location of a staff member, on or off property, 24.7. In many cases, timely support can mean the difference between a remedied risk and a large-scale incident; as such, having a dedicated safety platform has arguably never been more critical.

The hospitality industry, as we know, is founded on the carefully curated provision of exceptional service. While this will continue to be the cornerstone of hospitality experiences — across hotels and casino resorts alike — it is imperative that properties consider staff experiences with equal measure, ensuring a safe and confident workforce.

Watch NBC news coverage on how React Mobile is helping the Thunder Valley Casino in California make their employees safe.

Read a case study on our installation at Pechanga Resort Casino