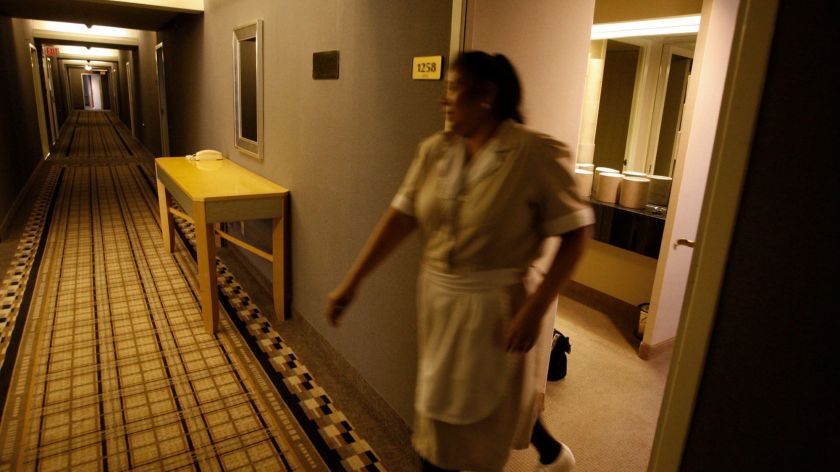 More than 5,000 U.S. hotels and resorts have begun offering employees security devices and training to help prevent sexual harassment — a problem that has gained prominence with the #MeToo movement and has been targeted by union leaders in Southern California.

A hotel trade group announced the progress Monday, saying an additional 15,000 properties will offer the devices and training by 2020. The news comes about a year after the top executives of Marriott, Hyatt, IHG, Wyndham and Hilton hotels held a joint news conference to promise they would address sexual harassment of hotel workers.

Since the promise was made last year, the American Hotel & Lodging Assn. said, 5,000 properties have offered their workers security devices, with the number of hotel companies committed to providing the devices and harassment training rising to 56 from 17.

Leaders of unions that represent hotel workers called the announcement a step in the right direction but they question whether the hotels will offer electronic panic buttons that workers can use to call for help in isolated areas of hotels or simply devices that emit loud noises, such as whistles.

“It’s a step in the right direction but it’s no guarantee to bring help unless it’s a real panic system,” said Kurt Petersen, a spokesman for Unite Here Local 11, which represents 30,000 workers employed in hotels, restaurants, airports, sports arenas and convention centers in Southern California and Arizona. 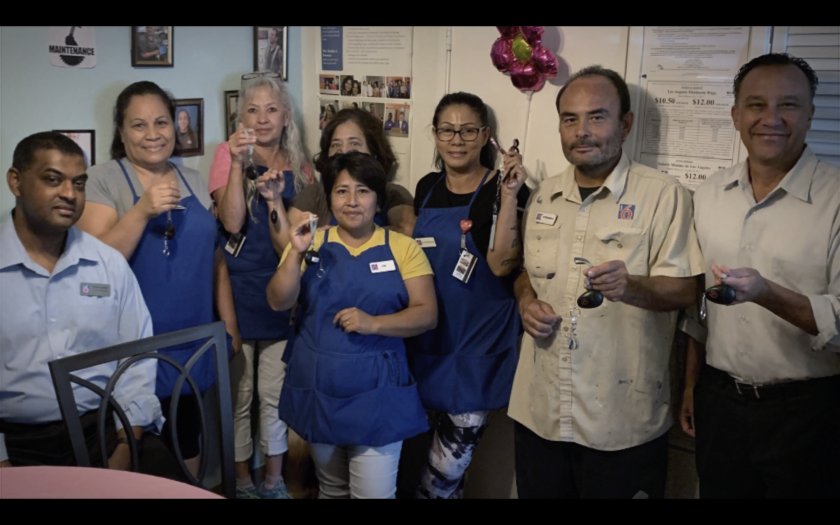 When representatives for Marriott, Hyatt and other major hotel brands made a commitment to address sexual harassment of workers last year, they said in a statement that each hotel company and property would be allowed to determine the most effective security device “with a range of options including devices with loud noise emitting features or emergency GPS tracking at the push of a handheld button.”

Rosanna Maietta, a spokeswoman for the American Hotel & Lodging Assn., said she knows of no hotel company that is simply handing out whistles to address sexual harassment.

“Every solution will differ per property based on the needs of the employees and the type of hotel, so a hotel on the side of a highway will have a different solution than a high-rise in Manhattan,” she said.

In the last 12 months, 39 hospitality companies, including hotel operators, investors and property managers, have joined Marriott, Hyatt and the other hotel giants in committing to providing safety devices and training to address the problem of sexual harassment.

The 39 companies range in size from Indiana-based Schahet Hotels, with 10 properties, to Interstate Hotels & Resorts, a Virginia-based group with 605 hotels and resorts.

The problem of sexual harassment of hotel workers gained prominence in Southern California after Sandra Pezqueda, a dishwasher working for a temporary staffing agency at the ritzy Terranea Resort in Rancho Palos Verdes, filed a lawsuit claiming she was fired for complaining about sexual harassment by her supervisor. Pezqueda was among several women named “Persons of the Year” by Time magazine in 2017 for helping start the #MeToo movement.

Pezqueda settled the lawsuit against the temp agency for $250,000. Terranea was dismissed from the suit without paying her anything.

Terranea was among the 39 hospitality companies that joined Marriott, Hyatt and other hotels with a promise to provide safety devices and training.