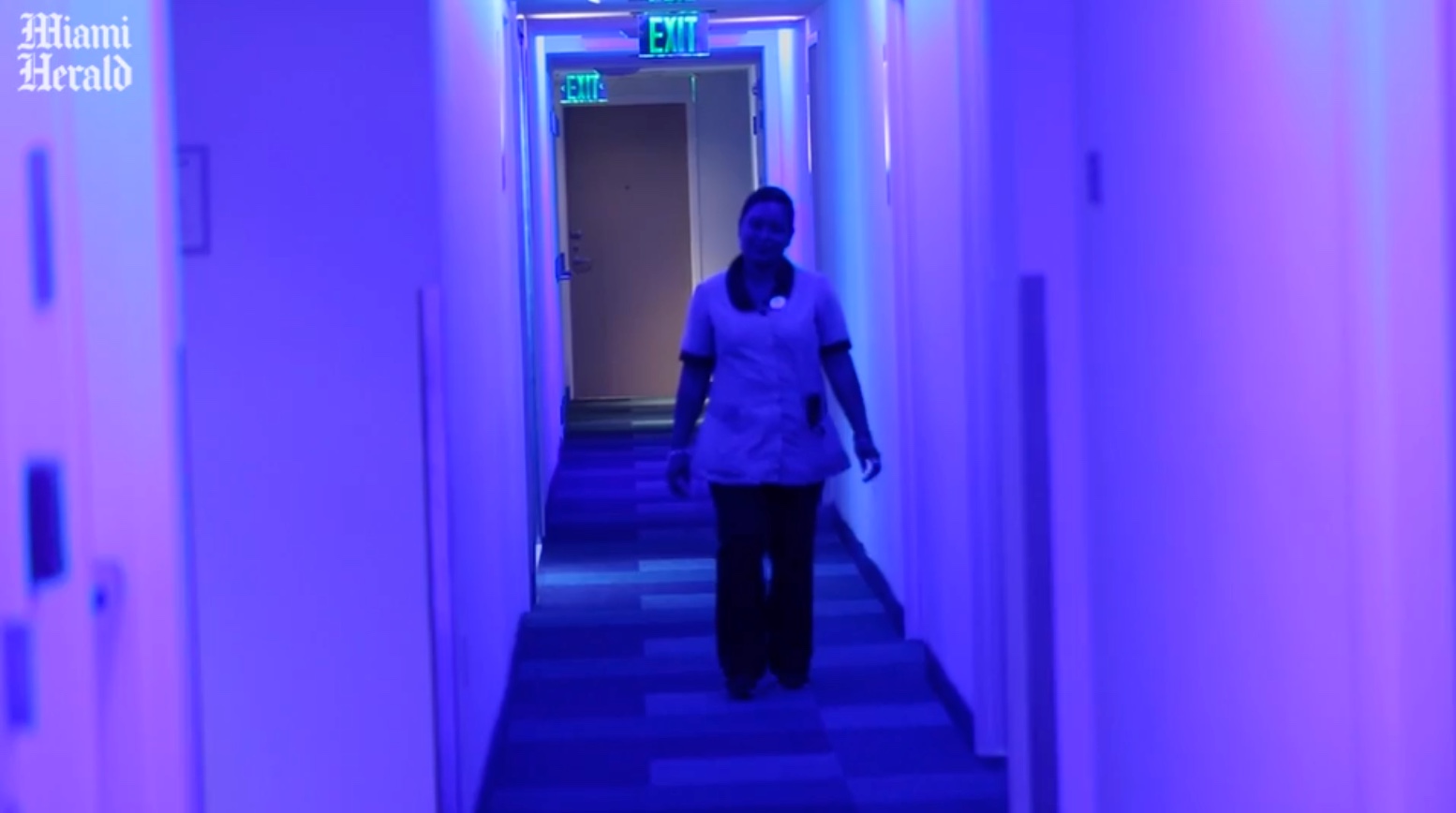 This article originally appeared in the Miami Herald and can be read here.

With just a month to go before Miami Beach’s hotel panic button ordinance takes effect, hotel operators are still confused about what kind of device they need to provide workers.

As the Sept. 15 deadline nears, some hotels are opting for noisemakers that sound off but do not indicate to security the exact location of the person in trouble. That, say critics, calls into question whether workers will be able to “effectively summon prompt assistance to the employee’s location by a hotel or hostel security officer,” as the ordinance requires.

The city has repeatedly declined to clarify whether noisemakers satisfy the ordinance — until now.

This week, after repeated requests for clarification, Miami Beach spokesperson Melissa Berthier confirmed to the Miami Herald that “a ‘noisemaker’ device, which does not provide the location of the hotel employee, would not legally comply with the requirements of the ordinance.”

Still, some hotels are moving forward with noisemakers, while others are electing for electronic systems with geo-location. Advocates say the noisemakers are insufficient.

The penalty for hotels that do not comply is a warning for a first offense and then fines between $500 and $2,000 for multiple offenses within a six-month period. After six months, the penalty starts back at a warning. Beginning Sept. 15, Miami Beach hotels will be required to submit an annual affidavit stating that they’ve met the panic-button requirements when they renew their business licenses. Miami Beach’s code enforcement division will respond to panic-button compliance-related complaints about hotels but will not inspect proactively.

The ordinance was originally slated to take effect on August 1, 2019, one year after it was passed at the height of the Me Too movement’s outcry against sexual harassment and assault on the job.

The Dream South Beach hotel on Collins Avenue and 11th Street, and the South Beach Group Hotels, which owns 16 Miami Beach hotels, led the push in Miami Beach this summer to delay the deadline of the ordinance, telling commissioners the panic button systems cost more than they do. Neither hotel group responded to requests for comment about the technology they will employ.

Michael Sheridan, a vendor who sells an electronic panic button system called React Mobile, said he has been fielding questions from hotels for months about whether they can use noisemakers or air horns to comply. His service costs around $2,040 per year for a 70-room hotel and he said he’s been contracted by several hotels including the Starlite and Shelborne.

In May, Sheridan emailed the City Attorney’s office on behalf of a potential hotel client asking for clarification about whether noisemakers qualify under the ordinance. Miami Beach chief deputy city attorney Aleksandr Boksner sent him an excerpt of the ordinance but did not provide a definitive yes-or-no answer. At a July 17 commission meeting, Sheridan again asked the city for clarification.

“I encourage the commission to clarify the existing language to make this ordinance have a meaningful impact for vulnerable workers in this industry and not simply give lip service to a serious problem,” Sheridan said at the meeting.

“We wrote it the way that we wrote it to make sure that there’s flexibility,” Boksner told Sheridan and commissioners. “We didn’t want to be specific. We want to recognize that what may work in a 6-unit hotel may not work in a 60-unit hotel.”

Not all Miami Beach hotel panic buttons call for help

Miami Beach hotels have one month to comply with new panic button ordinance. Some are giving housekeepers noisemakers that critics call ineffective.

Miami Beach modeled its panic button ordinance off of Chicago’s, which took effect in July 2018. The Chicago ordinance is more robust, requiring hotels to publish anti-harassment policies that allow for employees to be reassigned to a different area of the hotel to avoid an offending guest. The Chicago ordinance also makes it illegal for hotels to retaliate against workers who press the panic buttons and requires hotels to submit to twice-annual inspections.

According to Chicago’s Unite Here union that represents 8,000 workers at 46 downtown Chicago hotels, none are using noisemakers.

“There are a lot of different models and varieties that hotels are able to use,” said Sarah Lyons, a spokesperson for the union. “But a critical part of those panic buttons being implemented is that they summon immediate assistance that a noisemaker doesn’t, especially in hotels here in Chicago that are an entire city block long.”

Several hotels, including the Loews and Royal Palm hotels, did not respond to requests to identify what type of panic button they will use.

But at least one major Miami Beach hotel is going with a noisemaker.

Wendi Walsh, the secretary-treasurer of the local Unite Here 355 hotel union, said the Fontainebleau — the largest hotel in Miami Beach with more than 1,500 rooms on nearly 40 floors — has purchased key chain alarms that make a loud noise but do not send a location to security. According to Walsh, the hotel will direct employees to call security on the hotel phones if they hear an alarm go off.

The Fontainebleau did not respond to questions about the device and how the hotel will ensure security arrives promptly to the location of the person in trouble.

“The safety and security of our team members is our top priority,” said Silvia Pereda, vice president of human resources. “We are and will continue to be in compliance with the City of Miami Beach ordinance.”

To test the device, the Miami Herald purchased the same type of noisemaker for $11 from Mace, an Ohio-based pepper spray and alarm company and deployed it in a hotel room at the Clevelander Hotel on Ocean Drive. The alarm is activated by pulling a metal pin out of the plastic device. According to Mace’s website, the sound is louder than a power drill but quieter than a balloon pop.

In the test with the room door closed, the alarm noise could be confused for static on a television from the hallway. The noisemaker is easily muffled by holding it tightly; the alarm is easily deactivated by replacing the pin in the device. The apparatus only makes noise and does not have any GPS capabilities.

The Clevelander Hotel on Ocean Drive is a party hotel, and management isn’t shy about saying so.

The beds are jump-proof and sealed to the floor to prevent any liquid from sliding underneath. The balcony walls are taller than required by city code to deter guests from the temptation of a 20-foot plunge into the pool below. Shirtless, shoeless guests walk around with cocktails in plastic cups even before the poolside bar opens at 11 a.m.

“The issue we have here is probably a lot of people left in rooms or that are getting up late so sometimes there would be issues where they’d want the housekeepers to perform their jobs while they might be in the room,” he said. “That becomes a decision that the housekeeper has to make.”

Since April, all 14 housekeepers at the Clevelander and neighboring Essex hotels have been trained to use pocket-size touchscreen devices from a local company called Creating Revolutions.

Several other Beach hotels have also contracted with Creating Revolutions, according to Einar Rosenberg, chief innovation officer, including the nearby Beacon Hotel South Beach.

At the Clevelander, Palma said he paid a $249 flat fee for each of the five devices and pays Creating Revolutions $2 per month per room (he has 142 rooms in total) for room sensors. Installation of the system took less than a day, he said.

“For me it’s very important,” said Mardith Wilson, who has worked as a housekeeper at the Clevelander for two years. “Especially here in Miami Beach.”

On a recent Thursday afternoon shift, Wilson knocked on a hotel room door to advise any guests that she was there to clean. She tapped her device to a barely-visible sensor outside the door. Then, she entered the room and checked the closet and bathroom to make sure no one was inside. She tapped the device to a second sensor next to the bed once she was sure the room was empty. If she fails to tap the second sensor within two minutes, the device sends an alert to the hotel’s security team summoning assistance to her exact location.

To demonstrate the technology, Wilson yelled “Ayuda, ayuda, ayuda,” (Spanish for help), sending an alert to security. The alarm can also be activated by pressing a button.

Within two minutes, two security staffers ran through the door. One tapped his device to the sensor outside the room to let the entire staff know he arrived and then he entered a code into Wilson’s device and the alarm stopped sounding. The alarm can only be deactivated if the security team enters that code.

Palma has also installed a third sensor just inside the hotel room doors that housekeepers tap when they exit after cleaning. This provides data about cleaning times that Palma said will help him adjust workloads and improve efficiencies.

In New York City, where panic buttons for hotel workers are required in union contracts, employers are only allowed to use them for safety, not to track workers.

“The primary reason we have it right now is for safety and that’s our ultimate reason for why it’s been implemented,” he said. “The efficiency part right now gives us data...We look at it as a way we can understand our business better, understand their needs and work together.”

This article originally appeared in the Miami Herald and can be read here.