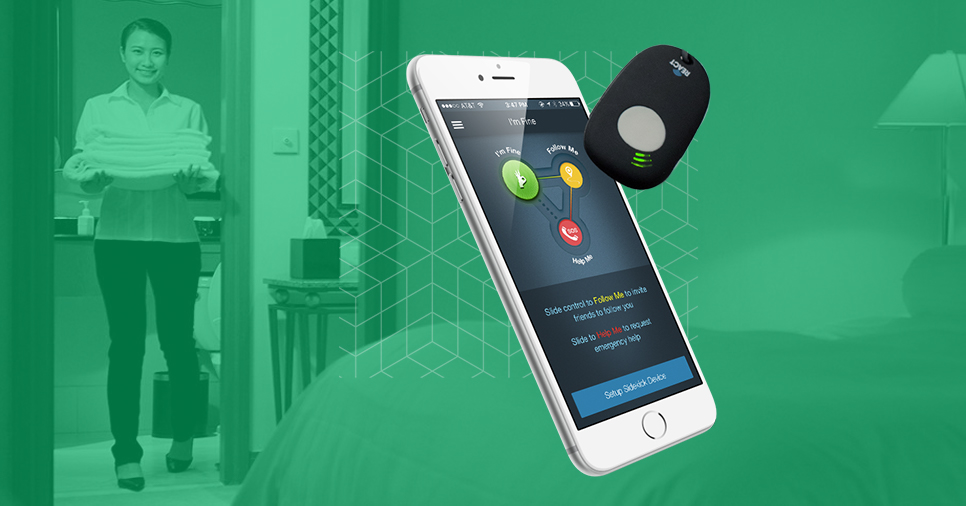 In 2003, while studying business at Loyola Marymount University, Robb Monkman was living off-campus with his roommates when the unthinkable happened.

“Two armed men broke through our door and proceeded to rob us at gunpoint,” he said.

While Monkman and his roommates were duct taped and held hostage, a sobering thought occurred.

“It became clear there was no way to pick up a phone and call for help, at least not without escalating the situation,” he continued.

“Two armed men broke through our door ... It became clear there was no way to pick up a phone and call for help."

Luckily, the criminals left without harming Monkman or his roommates, but the incident left an impression on the young business student.

Today, Monkman brings more safety and security to the world as the founder and CEO of React Mobile, a leading provider of enterprise safety software and panic buttons for the hotel industry.

And the business of keeping hotel workers safe is big and growing.

Since 2016, React Mobile has grown annual revenue tenfold, and the company is estimating its revenue will grow to 40 times its current size over the next year alone.

A break-in motivated Robb Monkman to found React Mobile, the leading provider of panic buttons for the hotel industry.

From student, to safety advocate, to business owner

In the aftermath of the robbery, Monkman directed his attention to developing safety products for university students. He noticed many “blue-light safety call boxes” scattered around campus, but in the age of smartphones and applications, the technology appeared outdated and impractical.

“I wanted to put the capabilities of the blue box into the palm and pocket of every student on campus,” he said.

After getting both bachelor’s and master’s degrees, in 2008, Monkman built a free safety app to do just that.

After getting both bachelor’s and master’s degrees, Monkman built a free safety app.

“The initial app was pretty basic, a minimum viable product,” he said. “It was more of a hobby than anything else.”

During the company’s initial growth phase, Monkman turned to Kickstarter to fund the development of another product: a Bluetooth enabled panic button designed for the consumer market. The project was funded and led to the creation of React Mobile’s first panic button -- a keychain-sized device with an alarm button that sends a message to a user’s contacts in the case of emergency. Monkman sold the product through major retailers like Target, Walgreens and Amazon.

React Mobile started out selling its panic button device to everyday consumers via retailers like Target.

React Mobile was up and running. But “unfortunately, selling our solution to retail proved to be risky and expensive,” said Monkman.

React Mobile turned its attention to the B2B market around 2014, and that’s when things really took off.

Today, React Mobile has found a sweet spot offering a comprehensive enterprise safety platform to customers in the hospitality industry and counts some of the biggest hotel brands in the world as clients.

The technology that makes React Mobile’s safety and panic button solutions operate is complex. But at the heart of these products is the company’s altruistic mantra – “Make today a safer place.”

Today, React Mobile exists to help hotel employees in emergency situations. For instance, in the case of a medical emergency, worker assault or robbery, one click of a React Mobile panic button -- often attached to a worker’s keys, uniform or badge -- sends a signal to hotel security, the manager and other selected emergency contacts.

The alert registers, identifies the worker and passes along GPS coordinates to pinpoint their location, which is accurate down to the hotel floor and room number. React Mobile’s panic buttons also work off-property, offering protection for employees like shuttle drivers.

The open source platform integrates directly into a hotel’s existing software so there’s no additional training for hotel staff to get started.

When implementing React Mobile in a new hotel, “the employees will sign onto the same application that they use every day,” said Monkman. “The only difference is that they will pick up a panic button and turn it on.”

Becoming the panic button of choice for the hospitality industry

Before becoming the panic button of choice for hotels, React Mobile deployed its technology at universities, healthcare companies and real estate agencies.

But in 2016, the Hotel Employees Health and Safety Initiative passed in React Mobile’s hometown of Seattle, Washington. The bill included new health and safety protocols for hotel employees, including the mandate that hotels with 60 rooms or more provide panic buttons for employees. Monkman saw this as a big opportunity. He reached out local properties and scored a large casino as his first hotel client.

In 2016, a hotel employee safety initiative passed in React Mobile’s hometown of Seattle. Monkman saw this as a big opportunity.

Monkman didn’t know these exact laws were coming while building React Mobile, but he was anticipating changes to the security needs of individuals and businesses alongside advances in technology.

Hotel unions such as UniteHere! and industry groups like the American Hotel & Lodging Association (AHLA) have driven the demand for increased worker safety across the hospitality industry. As an early and trusted partner with big hospitality brands and casinos like Pechanga Resort and Thunder Valley, React Mobile is uniquely positioned to capitalize on this massive and timely trend.

So far, progress has been promising. Since attaining its first hotel client in 2016, React Mobile has grown to include over 200 hotel clients and has nearly 50,000 panic buttons in circulation.

React Mobile has grown to include over 200 hotel clients and has nearly 50,000 panic buttons in circulation.

Recently, two dozen major hotel brands signed on to the AHLA’s 5-Star Promise, vowing to implement employee safety devices in each of their thousands of U.S. locations by 2020. As the existing preferred vendor to these hotel brands, React Mobile will support the rollout of panic buttons across these properties.

“We understand that our customers are facing an overwhelming challenge of deploying a reliable safety solution across thousands of properties by the end of 2020,” said Monkman. “We are focused on helping them plan for economies of scale in their commitment to protecting employees.”

Preparing for the wave

The challenge for React Mobile today is not finding more customers in the hospitality industry. Instead, Monkman’s main goal as CEO is to scale his company and platform. The scaling is twofold -- the company is not only building out operations teams like account management, customer support and installation technicians but also ensuring the reliability of the technology infrastructure meets the rising demand.

“We may need to deploy our technology to 5,000 hotels in the next 18 months,” said Monkman. “Our rallying cry is - prepare for the wave.”

Anticipating this growth, Monkman explained that he is hyper-focused on industry development and pays particular attention to four core elements of his business

1. Manufacturing – The company is ramping up manufacturing with more planning and securing more capital to meet greater inventory and production needs.

2. People and support – A thorough operations plan is implemented to handle an influx of integrations and technical support for hotel partners.

3. Technology – All technology is scalable and monitored to handle increased customers and data loads.

React Mobile now has hotel partners in the Middle East and countries including France and Switzerland. According to Monkman, domestic dominance and international expansion is the next phase of company growth.

Although the hospitality industry is the company’s primary focus through 2020, React Mobile will soon expand its services to other industries.

As the tidal wave of safety requirements and solutions continues to build, React Mobile intends to ride the wave, remaining a market leader.